After a lot of trying out, we decided to go with iMovie as out editing software. Vegas was quite complicated, and final cut pro pretty confusing. iMovie was also pretty convenient as it was the only software we had. The problem was, only I had iMovie, so the amount my partner was able to edit was minimal. He had limited time, as he usually had to come over to my house to work on it.

What we’ve done so far:

As I said, only I had iMovie, so I was in charge of the more fine details which took loads of time. I mainly did things like syncing the song with our lipsinging and adding in the effects (this was also because out of the both of us, I was the more experienced with this, even though I’m not actually very experienced). I was in charge of the overall clip time management , and how long each clip lasted (basically, I combined all the footage).

My partner (Gordon), did most of the rearranging in our project. He was also the one sorting deleting/cutting/trimming through all the footage we took. He did apply some effects though (in the middle part of the video, 00:14-00:57), otherwise I would be doing too much.

What I’ve done (in more detail): 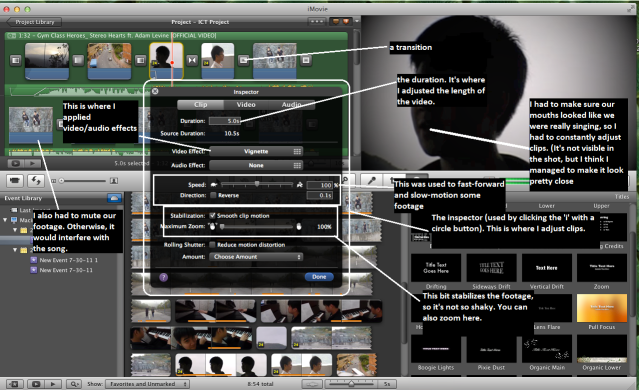 I also had to mute our footage, but that wasn’t too hard. I just adjusted the volume to zero. 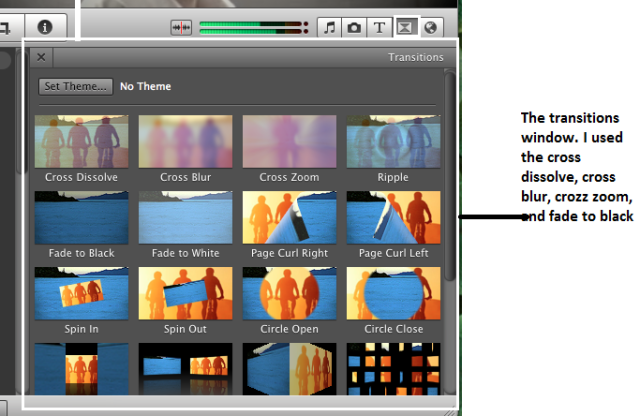 As I stated in the annotated picture, I used Cross dissolve, cross blur, cross zoom and fade to black. I used these because I thought that they looked pretty decent, and I wanted to avoid the effects like page curls and ripple, because they looked very fake and unrealistic. As I stated above, I was constantly readjusting the length of transitions in the inspector ( the problem is stated above). I also adjust things like contrast and exposure to make it look cooler. 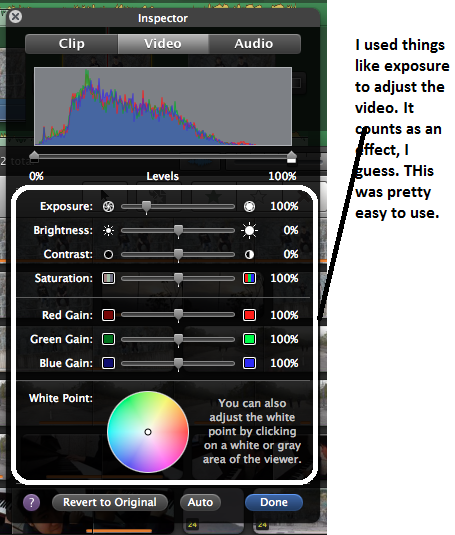 This was pretty handy, as several times, our footage was a bit too dark, so I used these to brighten it up a bit. I also sometimes changed the color of the video (this can be seen in the opening, where cars are passing through).

I played around with some footage, and managed to get some pretty good stuff.

Also, during the week, my partner left a comment on the video on youtube (due to the fact that we couldn’t find a proper email address to send the request to) asking for permission to use the song in our project. It should be good enough.

Our request for permission of the song

Luckily, we didn’t actually use any other audio or footage that belonged to us, so we didn’t have to send any other emails/comments for permission.

My past two journal posts have been usually short, so I hope this long one makes up for it. It was much easier for me to blog about it because I was editing and working on software.

Sha Tin College 10S
View all posts by jaoj2 →
This entry was posted in Project 4 - Music Video Project, Projects, What I Did Today. Bookmark the permalink.